This Is the Tour of the 9 World Heritage Sites by UNESCO, including the land of “Don Quixote”. The cities of Middle Spain were built between the eleventh and fifteenth centuries, a time when Christians who had fought the moors in the north were reconquering Spain. Due to the ever-present threat of war, these cities are heavily fortified, and contain palaces, cathedrals, churches, monasteries and city walls, and many of them have been declared World Heritage Sites by UNESCO . In this specially designed cultural tour, we ride our motorcycles through the Central Mountain System, a 400 km long mountain range stretching from northern Madrid all the way to the Portuguese border. Every day we ride between impressive array of mountains, as in example Pico Peñalara (Madrid), 2,428 metres high, and Pico Almanzor (Avila), 2,592 mts high. With this backdrop, and impeccable roads with lots of bends, your enjoyment is guaranteed.
We spend our rest day sightseeing the city of Salamanca, where we have great pleasure of all our senses, taking in the acount that is the area where is produced, the mundial well known Iberic Cured Ham. Coming back from Caceres, we shall pass through the Mountains of Toledo and the Valleys Route. These mountains are not so high than Central System, but the rolling hills, the colours of the soil due to the mixtures of granite and clay, and the gorges caused by the erosion of rivers passing through them, gets extraordinary landscapes. We have delicious cuisine while all the circuit.
The World Heritage Sites of: The Old Town of Segovia (WHS) with is Roman Accueduct, the Monastery and Site of the Escurial, the Old Town of Avila, the Old City of Salamanca, the Old Town of Caceres, the Royal Monastery of Santa María de Guadalupe, the Old City of Toledo, the Aranjuez Cultural Landscape, and the University City of Alcala de Henares.The Natural Park of “Peñalara”, The Natural Park of “Las Batuecas”, “Sierra de Gredos”, “Montes de Toledo”.In day 4, we have the taste of the real Iberic cured products, visiting one of the most relevant factories in Salamanca.

World Heritage Sites of: The Old Town of Segovia with is Roman Accueduct;  the Monastery and Site of the Escorial; the Old Town of Avila; the Old City of Salamanca; the Old Town of Caceres; the Royal Monastery of Santa María de Guadalupe; the Old City of Toledo; the Aranjuez Cultural Landscape; and the University City of Alcala de Henares.
Natural Attractions on the way: The Natural Park of “Peñalara”; The Natural Park of “Las Batuecas”; “Sierra de Gredos”; “Montes de Toledo”.
Special Activities: In day 4th, we have the taste of the real Iberic cured products,  visiting one of the most relevant factories in Salamanca. Your tour guide will pick you up from the airport and bring you to your hotel in Madrid the capital of Spain. After we get you settled into the hotel and you become acquainted with your bike, just take it easy – rest in the hotel, see the town or take a short introductory ride with the guide to get accustomed to the bike (starts at 5 PM, takes about 2 hrs) In the evening we will meet for a welcome dinner and then we will present the format of the tour and describe in detail the route of Day 2.

We leave Madrid and very soon we start to enjoy the exciting bendy roads and the beautiful scenery that is just a taste of what is to come throughout the tour. We will pass the mountains of “Guadarrama” to reach the Old Town of Segovia (WHS) with is Roman Accueduct where you will be welcomed by the views of “Peñalara”.Forest of pine trees & oak trees will be our partners for much of the day.

On the journey from Segovia to Ávila, we head back towards the Madrid area to stop for a while to take in the breathtaking views of the Monastery and Site of the Escurial(WHS). The riding is guaranteed to be fun because of the wicked and well maintained roads with their amazing sights. The Old Town of Avila(WHS) It’s sometimes called the City of Stones and Saints, and it claims that it is one of the cities with the highest number of Romanesque and Gothic churches (and bars and restaurants) per capita in Spain. It is notable for having complete and prominent medieval city walls, built in the Romanesque style. All the way from Segovia to Ávila we ride on nice maintained bending roads in the range of mountains of Central System.

Our tour takes us to the natural park “Las Batuecas” along the spectacular mountain range of Gredos, where the Pico Almanzor, or Almanzor for short, is located at 2592 m, it is the highest peak in the Central Highlands. We will experience breathtaking, winding roads and a unique motorcycle feeling. Near Salamanca, we will drive through one of the best known areas of the famous Iberian ham. We’ll take a break to learn about how it is produced and to taste this delicacy.

Today we can decide to do one of our favorite activities a motorcycle ride of 225km – 5h. through the Iberian mountain range, the natural park Las Batuecas where the Sierra de Francia is located, or a guided visit trough the city of Salamanca, one of the most beautiful cities in Spain. The old town was declared a World Heritage Site in 1988 and is known both for its historical sights and for its university, the oldest in Spain. The city attracts thousands of students from around the world each year, creating a diverse cultural environment. Salamanca is home to classic Iberian ham and other exquisite delicacies.

Near Salamanca we take a road full of beautiful curves deep into the oak forests of Bejar and Peña de Francia. We pass the valley of Jerte, the views of its world-famous cherry trees are completely unrivaled. We drive through Plasencia where we will have lunch. Plasencia is a bishopric founded in 1186 the image of the city center is characterized by buildings from the 13th to 19th centuries. We continue towards Cáceres this old town of Cáceres is a UNESCO World Heritage Site. If you can internalize the history of Caceres, you get a very good insight into Spanish history. This land, inhabited since the Stone Age, tells the different phases through which humanity went, Romans, Almoravids, Jews, Portuguese, Castilians each with their own culture and historical heritage.

We start the trip today with an easy ride to the city of Trujillo and then we enjoy the unforgettable riding experience of the Toledo Range of Mountains, they are not very high but have a really great landscape of stone, olive and Holm-oak woods. We stop on the way to visit the Royal Monastery of Santa María de Guadalupe(WHS). Once in the Old City of Toledo(WHS), you feel it as an absolute maze of history which dates back to the year 192 BC when it was conquered by the Roman legions and the history is rife between then and the sixteenth century. All architectural styles and all cultures have left their unique sample presence in Toledo.

or guided visit in Toledo)

Today there are again two options, either a motorcycle ride 230km – 4h. through the Cabañeros National Park one of the most important protected areas on the Iberian Peninsula or let our machines rest to admire the city of the three cultures. In Toledo we feel like we are in an absolute maze of history from the year 192 BC. BC when it was conquered by the Roman Legion, later the Visigoths followed and then the dominance of the Moors followed. All architectural styles and cultures have left their unique presence in Toledo

Some more enjoyable easy riding to reach the Aranjuez Cultural Landscape (WHS), where the royal palace & gardens are unavoidable, and then ride along the “Valleys Route” to reach the University City of Alcala de Henares (WHS).

Depending on the time of your return flight you may have some time to stroll the city of Madrid visiting the Historical Center with the Opera and the Royal Palace, or the Alcala Gate, The Circus of “La Cibeles”, The Main Square “Plaza Mayor”, or maybe museums such as “The Prado” or “Thyssen”, or even the “Retiro” Park, Gran Vía Street, etc 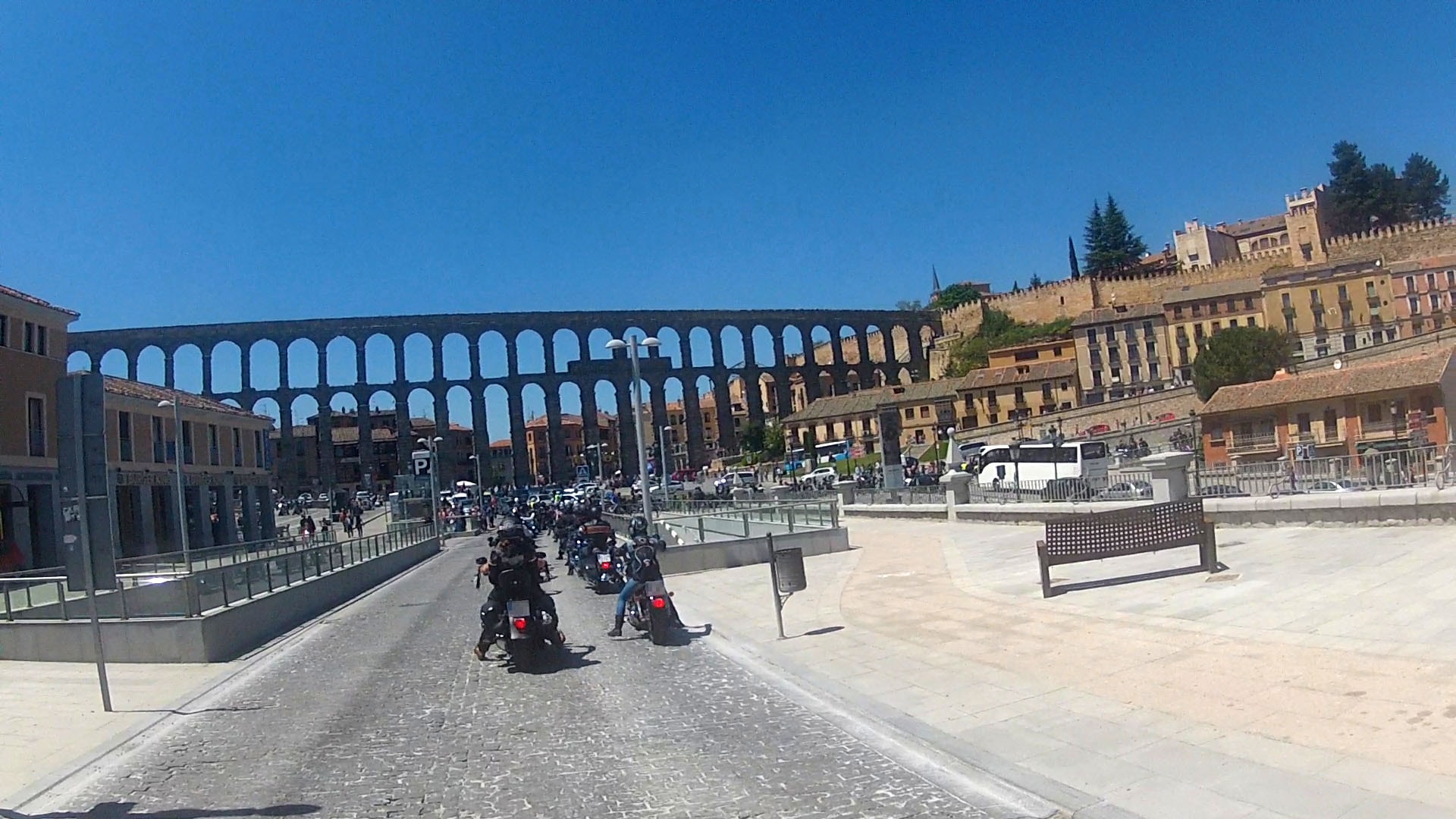 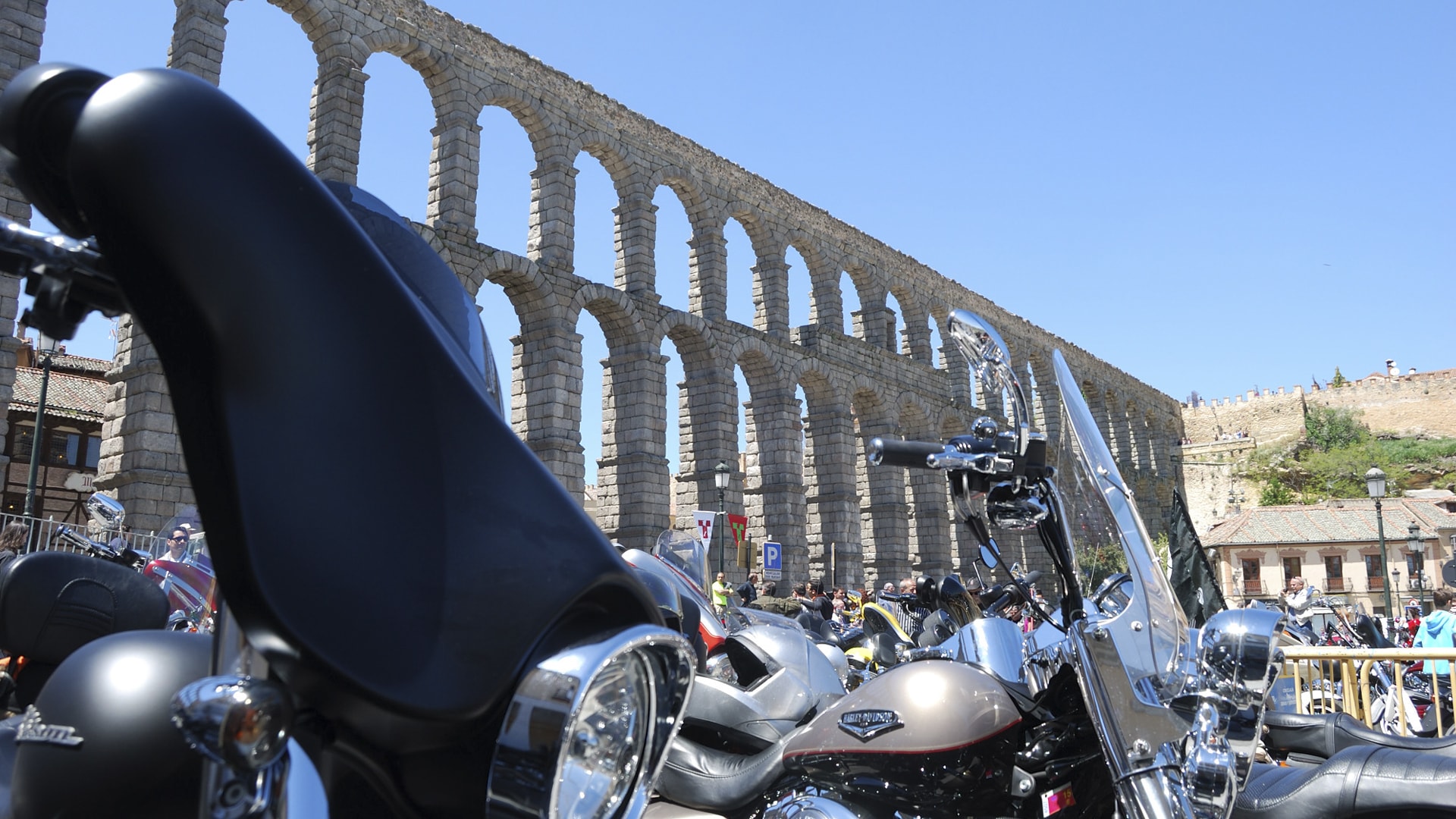 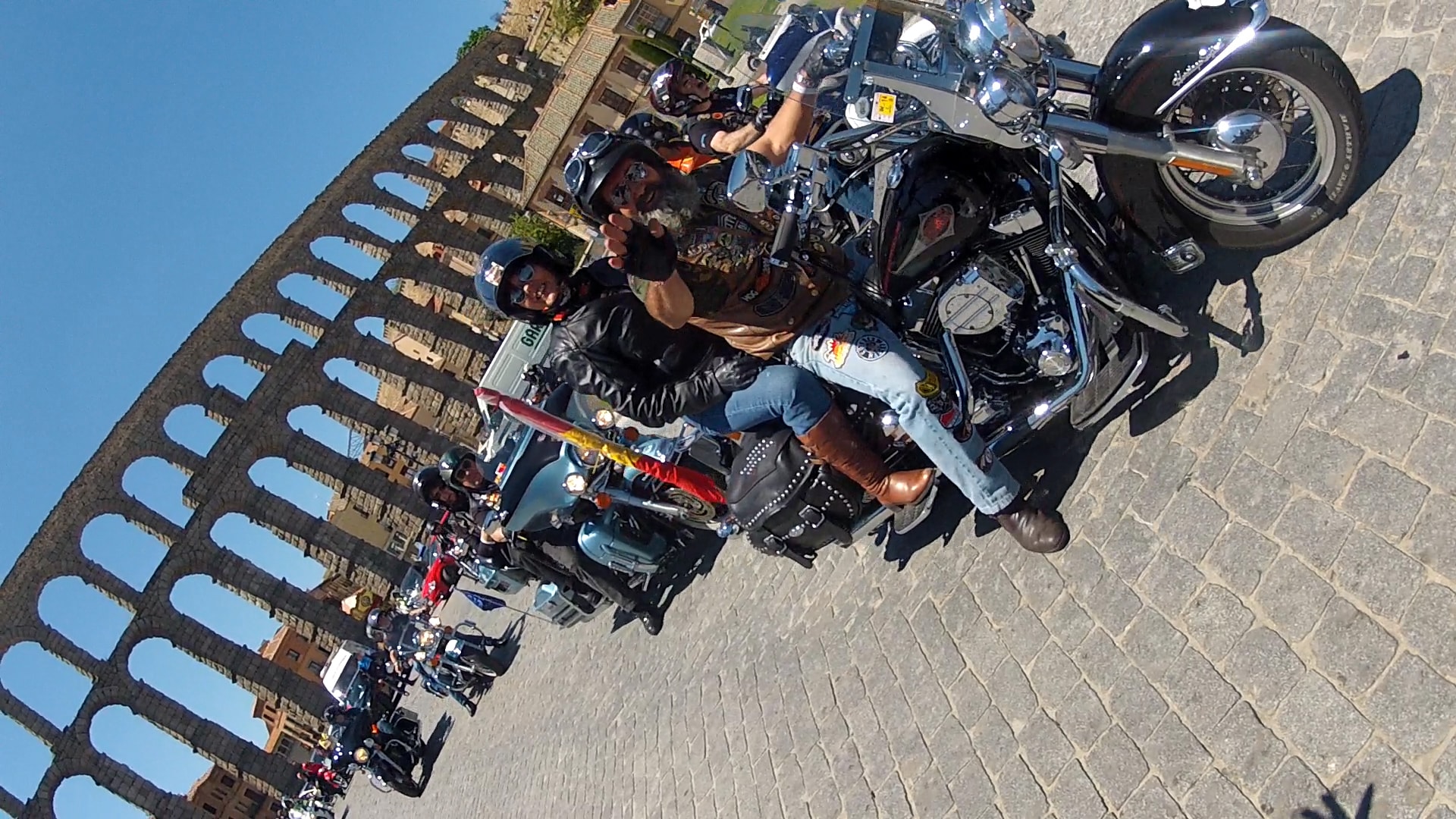 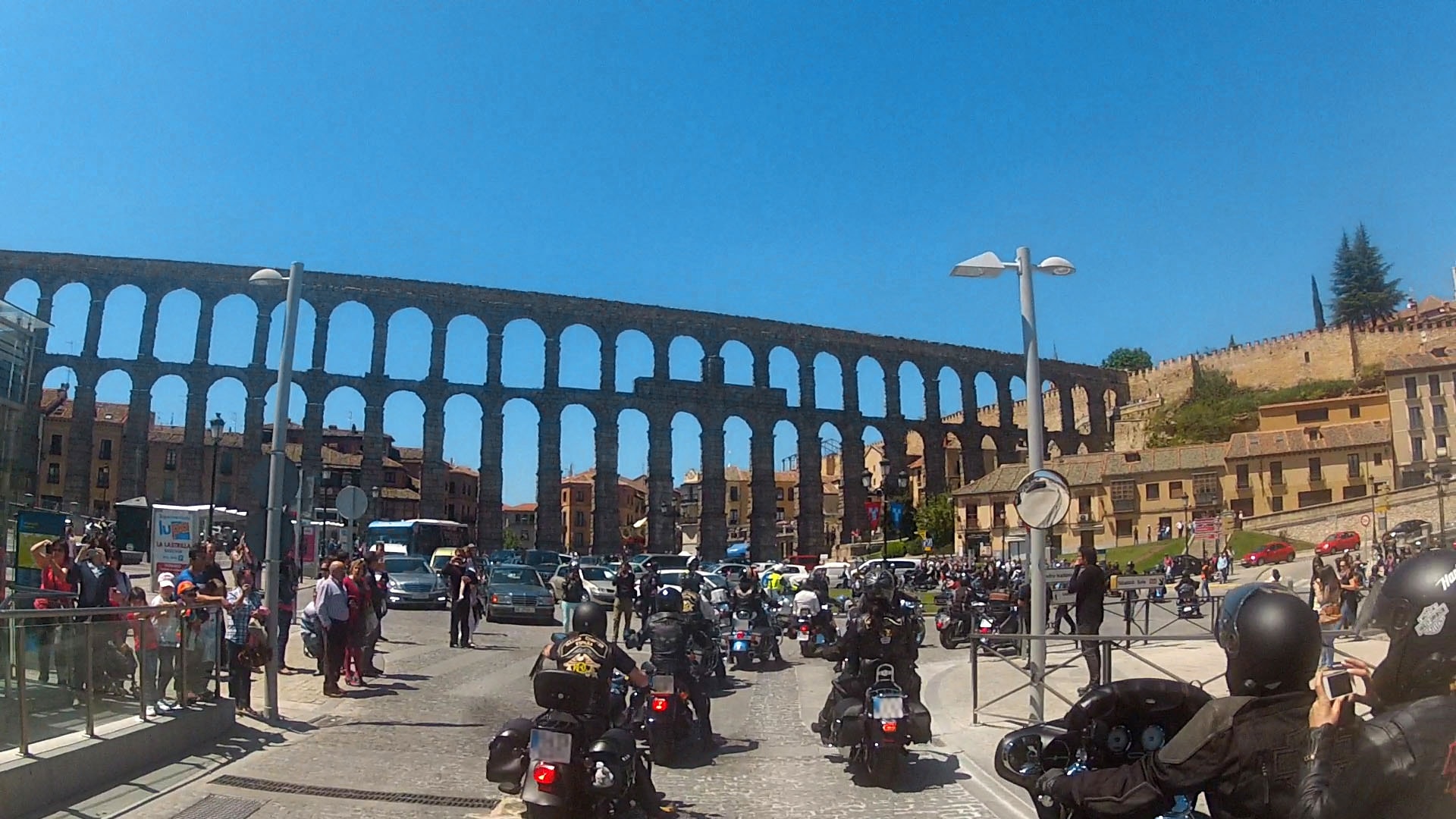 This website uses cookies to improve your experience while you navigate through the website. Of these, the cookies, which are categorized as required, are stored in your browser as they are essential for the working of the basic functions of the website. We also use third party cookies that allow us to analyze and understand how you use this website. These cookies are only saved in your browser with your consent. You also have the option of deactivating these cookies. However, disabling some of these cookies may affect your browsing experience.
Necessary Always Enabled
Necessary cookies are absolutely essential for the website to function properly. These cookies ensure basic functionalities and security features of the website, anonymously.
Analytics
Analytical cookies are used to understand how visitors interact with the website. These cookies help provide information on metrics the number of visitors, bounce rate, traffic source, etc.
SAVE & ACCEPT
-